Ever feel like your barista is speaking a different language when they're explaining their menu? Are you unsure what your friends are talking about when they're discussing a bean's complexity, body, or roast? Here's a quick guide to some of the more commonly used coffee vocabulary.

True story: I am utterly confused by pig latin. It’s something I’ve never really understood. But, of course, pig latin is meant to be exclusionary. It’s meant to confuse those people who aren’t part of a particular group of communicators. The same could be said for cockney rhyme schemes. And some people might think the same about coffee.

If you’ve never worked in the coffee world, chances are you might be a bit unfamiliar with some of the language used by baristas or even with what’s written on your favorite coffee tin.

At Compass, it’s important to meet people where they are; that is, to help people in a way that aligns with their own unique previous experiences. That being said, Compass is all about training and providing people with the tools they need to be successful in nearly every situation. Therefore, we thought it was important to put together this glossary of coffee terms, so that the next time you’re waiting in line or the next time you’re looking at a tin you’ll have a better understanding of the ways in which the coffee world communicates.

This is by no means a comprehensive glossary of coffee terms. It’s just a resource aimed at helping you communicate with us, so that we can give you exactly what you’re looking for when you visit one of our cafes, come across one of our tins in a grocery store, and help you win at your local Zoom trivia night.

Acidity: The sensation of tartness in coffee. Usually, we associate brighter tasting notes with the acidity of the coffee. (For example: bright, berry-like, strawberry.)

Arabica: Coffee produced from the Coffea Arabica plant. Arabica coffee is the most widely used coffee in the world, comprising about 70% of all coffee produced. It is one of the earliest cultivated coffee types. 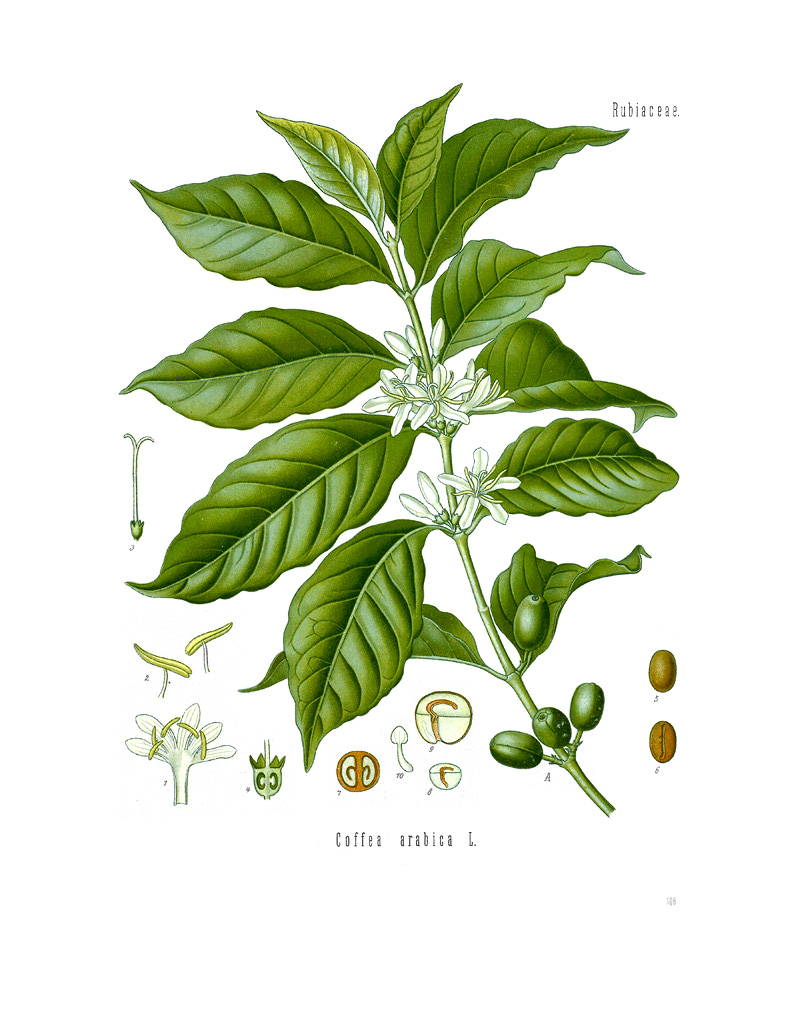 An illustration of the Coffea Arabica plant, its fruit, and its seeds. Courtesy of Franz Eugen Köhler, Public domain, via Wikimedia Commons

Aroma: The smell of freshly ground or freshly brewed coffee. Some call this the introduction to your coffee. It’s the first thing you experience before taking a sip.

Balanced: A term to describe coffee where no single flavor overpowers the other. It’s a smooth and even, yet interesting, cup of coffee.

Blade Grinder: A device that uses a sharpened blade to grind whole bean coffee for brewing.

Blend: A mix of coffee from two or more different origins or lots.

Body: This refers to the viscosity of the coffee. While full-bodied coffees have a thick mouth feel, coffees with less body feel thinner in the mouth. Body is usually determined by the presence of the coffee’s oil in the cup.

Bold: A term to describe the intense flavor of a particular coffee. Contrary to popular belief, a bold coffee doesn’t necessarily mean a stronger coffee. Whereas strength comes from the ratio of water to coffee, boldness comes from the bean itself. It’s perfectly possible to have a bold coffee that’s not that strong. (Think decaf!)

Burr Grinder: A device that uses interlocking adjustable disks, gears, or burrs to grind coffee into powder. These are industry standard, as they produce more consistent grounds than blade grinders.

Cappuccino: An espresso-based drink made with steamed milk and froth.

Cascara: The dried hull of a coffee cherry. Cascara is often used to brew tea-like drinks, including the Yemeni, Qishr.

Cherry: The fruit of the coffea plant. Each cherry contains two seeds or, occasionally, one conjoined seed. These seeds are harvested, then roasted into coffee. 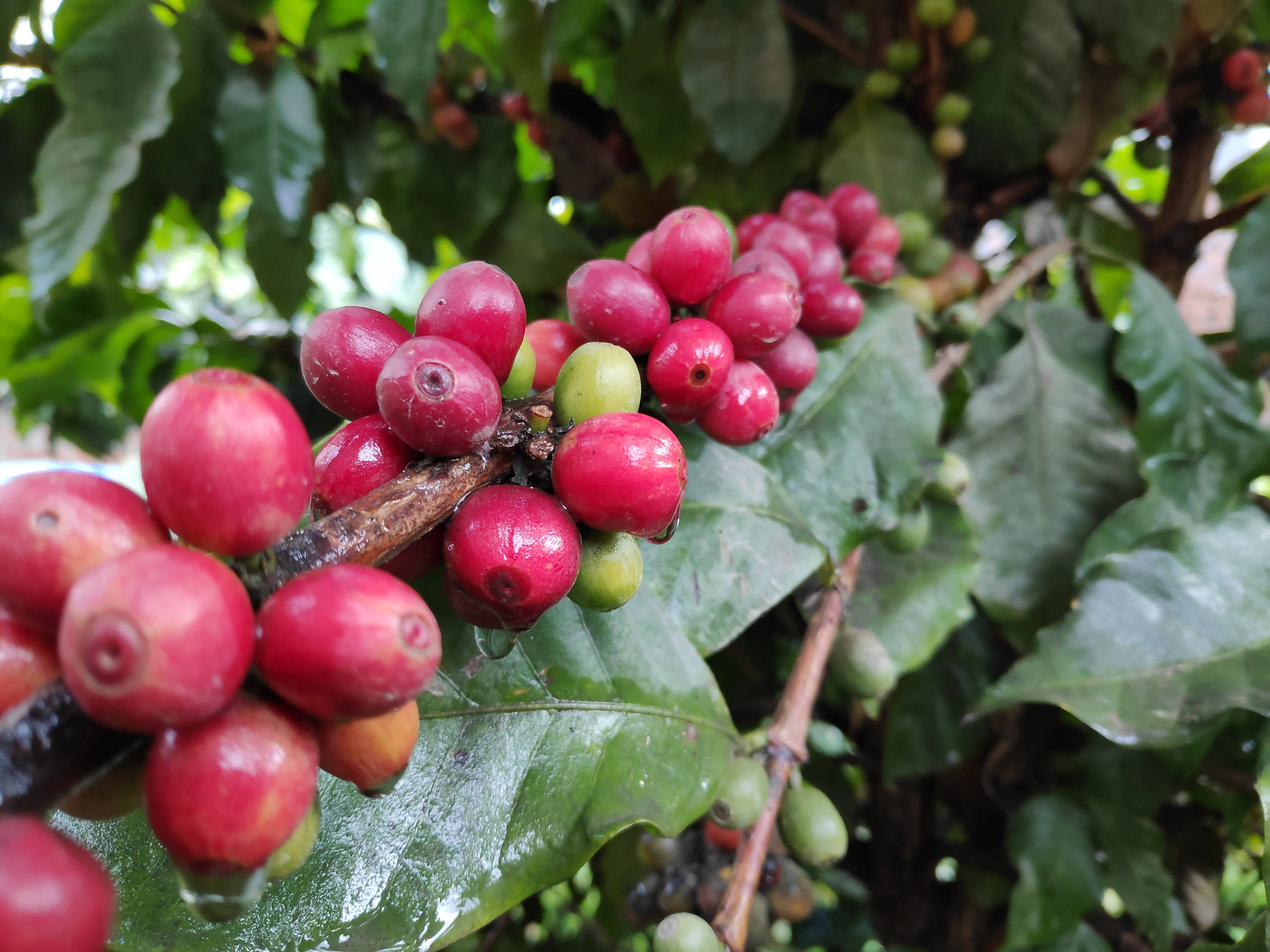 A photo of the coffee plant’s bright red cherry, which houses either one or two seeds.

Complexity: Typically, complexity notes a depth of flavor that causes multiple sensations as it makes its way across your tastebuds.

Cortado: Often referred to as a “mini latte,” cortados are equal parts espresso and steamed milk with a minimal amount of foam.

Crema: Crema is the marker of a well-pulled espresso shot. It is caramel-colored and aerated emulsion made of oils as they’re subjected to the high-pressure brewing of an espresso machine.

Cupping: This is the ritualistic practice of experiencing the aromas and flavors of coffee. It’s typically done by professionals, but can be done informally.

Dark Roast: A term used to describe coffee that reaches or goes beyond what’s known as “second crack.” At this point in the roasting process, the cellular proteins begin breaking down and caramelizing. Dark roasts are easily identified by their deep brown color and the presence of oil on the outside of the bean. Typically, dark roasts are fuller bodied coffees with deeper flavors reminiscent of brown sugar and molasses.

Decaffeinated: Coffee that has had a great majority of its caffeine content removed.

Degassing: The process wherein coffee releases excess carbon dioxide after it has been roasted. When sealed in a tin or bag, this carbon dioxide creates a “seal” around the coffee preventing premature oxygen exposure.

Doppio: A double shot of espresso.

Drip Coffee: A brewing method where hot water drips through a bed of medium-ground coffee.

Espresso: A brewing method where hot water is forced through a bed of finely-ground coffee. Typically, espresso shots are only one-to-two ounces in volume.

Filtered Coffee: Any method where the brewing process is separated from the brewed coffee by a filter–which can be paper, cloth, or metal. Filtered coffee is “cleaner” than unfiltered coffee due to the lack of coffee grounds in the finished cup.

Finish: The last sensation of taste while drinking coffee. This describes the moment right as, or immediately after, the coffee is swallowed.

Flat White: An espresso-based drink with flat, steamed milk. There should be little to no foam on top.

Flavor: The holistic sensory experience of drinking coffee. This encompasses the aroma, acidity, and body of the brewed coffee.

French Press: Also known as a coffee press, this is a widely popular immersion brewing technique where ground coffee steeps in water and then is filtered by pressing a metal filter down.

Group head: A part on the front of an espresso machine. Group heads are where you insert your filled portafilter when preparing to pull a shot of espresso and through where finished espresso pours into your glass. 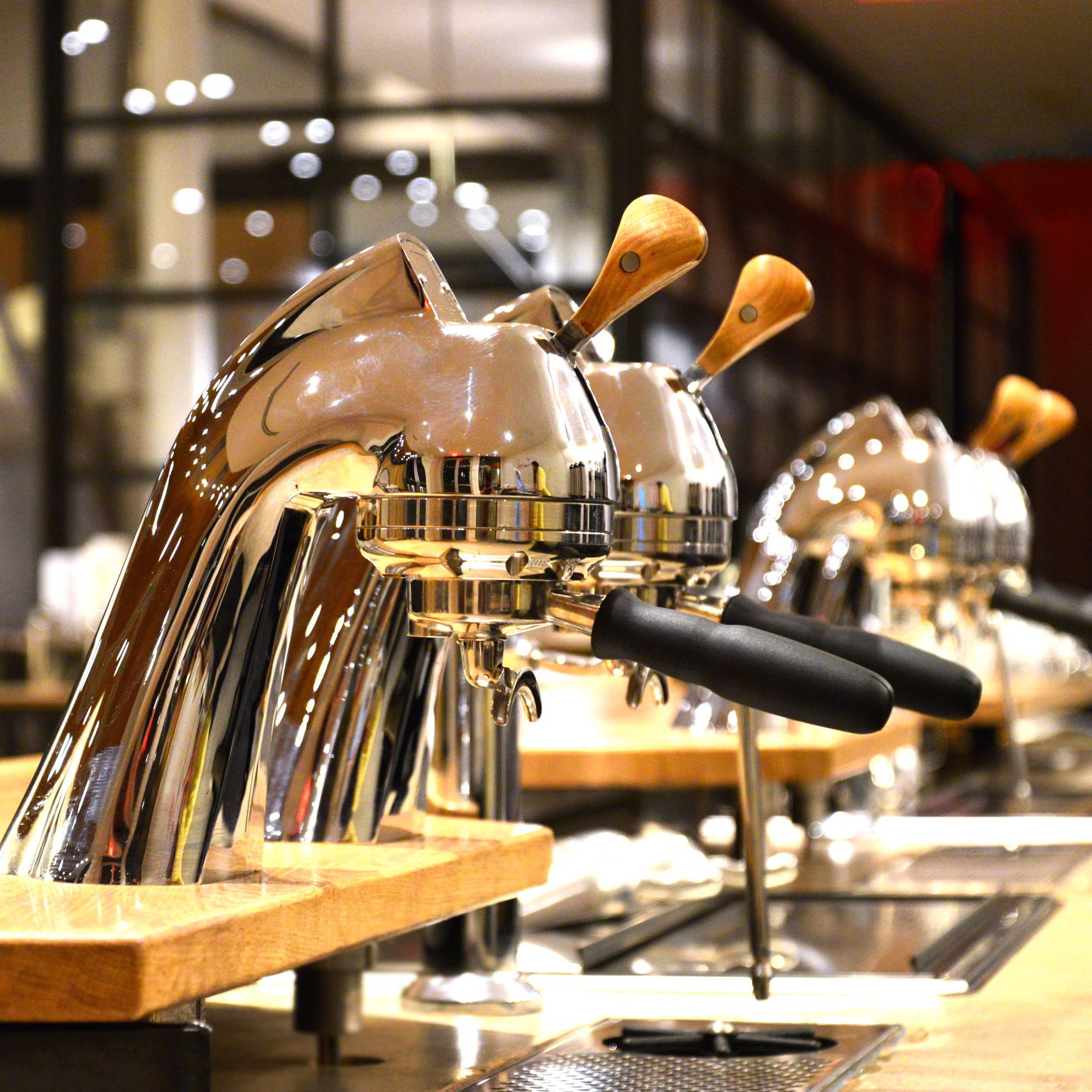 A Modbar EP group head at our Roastery in the Shaw neighborhood of Washington, DC.

Honey Process: Originating in Costa Rica, this is when the outer skin of the coffee cherry is removed, but a small amount of the cherry’s pulp remains while it dries. This process uses less water than both “natural” and “wet” processes.

Hulling: The removal of the coffee cherries’ skin.

Latte: A drink that is typically one part espresso to three parts steamed milk, topped with a fine layer of foam.

Light Roast: Coffee that’s roasted to a light brown color. Typically, light roasts will have a thinner body because they haven’t been roasted long enough to produce oil on the surface of the bean.

Peaberry: Peaberry coffee is the result of a naturally occurring mutation in the coffee cherry where, rather than two seeds, only a single, rounded, seed is present in a coffee cherry.

Portafilter: A metal object with a plastic, wooden, or rubber handle. The portafilter contains a “basket” filter, which is filled with finely-ground espresso beans and inserted into the espresso machine’s group head.

Pour Over: A brew method where a slow, timed, stream of heated water is poured into a bed of coffee until fully-extracted. Using this method, a single cup of coffee might take up to 4 minutes to brew. 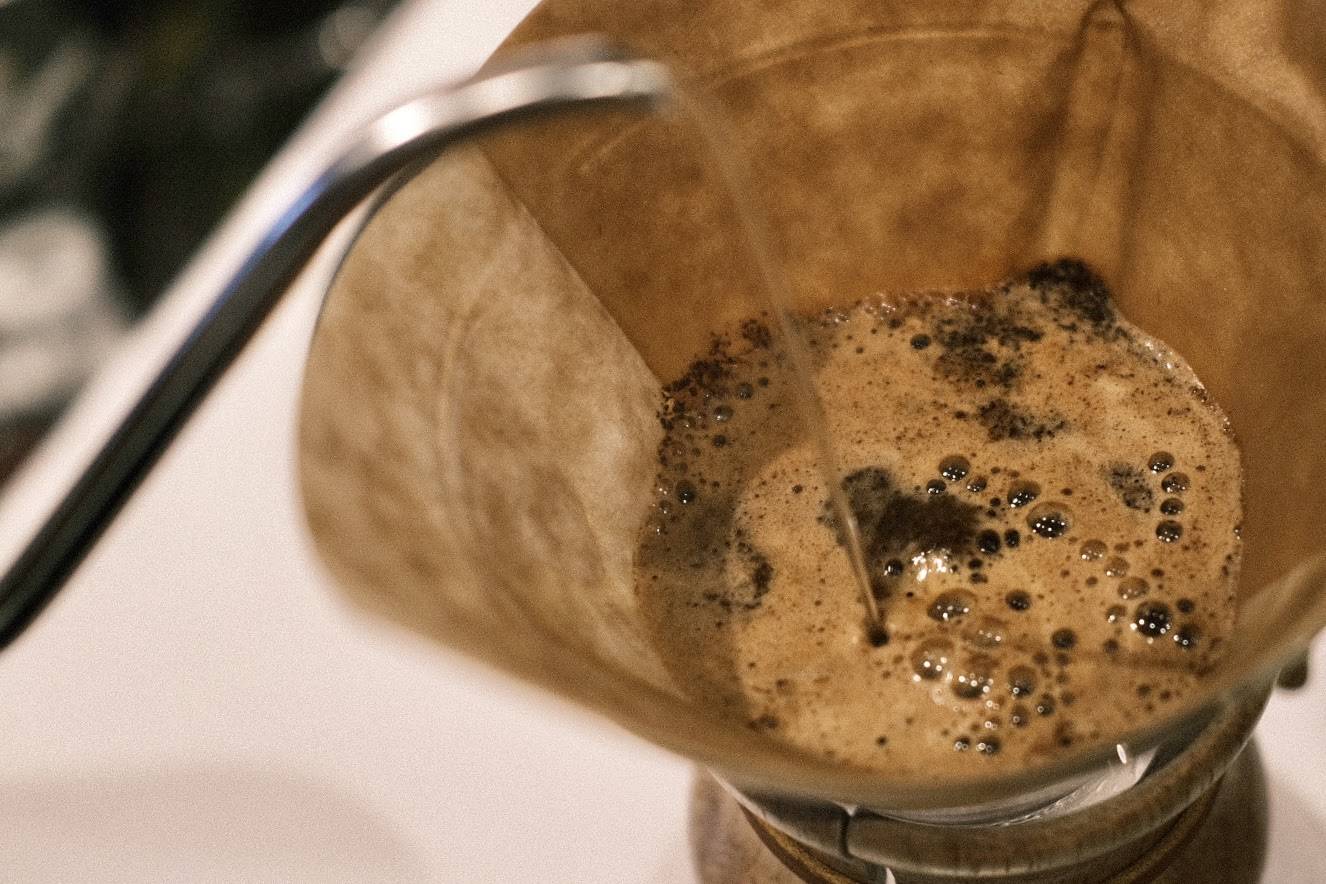 Brewing a mug of 7th Street Blend with a Chemex coffee maker.

Puck: The extracted espresso from a portafilter.

Pull: The process of brewing espresso. This term dates back to the original lever-based espresso machines and when, in order to initiate brewing, a barista would have to pull down a large lever and hold it through the entire brewing cycle.

Red Eye: Drip coffee (iced or hot) with a double-shot of espresso.

Seasonal Coffee: These are specialty coffees that are only available in limited quantities for a limited time frame. For example, Compass’s Cherry Blossom, Autumn, and Holiday blends.

Shot: A single ounce of espresso.

Siphon Pot: A brewing method where coffee grounds steep in an upper pot and are drawn into a lower pot.

Tamping: The process of pressing and evenly distributing ground coffee in a portafilter for extraction.

Wet Process: Most of the world’s coffee is wet processed. Wet processing coffee removes the skin and pulp of the cherry, prior to drying, and while the cherry is still fresh.

SHOP OUR COFFEE BLENDS!
Shop Now
Previous
Which Coffee Brewing Method is the Best Option for Me?
Next
Understanding the Weird History of Decaffeinated Coffee and How It's Made