Free Shipping on Orders over $25!

Coffee in American History: Part 2, from World War 1 To Now

This is the second of a two-part series exploring the history of coffee in American culture.

Previously on Coffee in American History: Following some harsh taxes on tea, colonists turned to coffee as their drink of choice. Over the years, coffee became such a staple of daily life that momentary cease-fires were called during the Civil War so troops could exchange coffee for tobacco.

Before we continue into 20th Century America, we need to take a brief international detour...

We know that innovation comes from necessity. At the start of the 20th Century, a German housewife named Melitta Bentz was unhappy with the brewing methods available to her. She “found that percolators were prone to over-brewing the coffee, espresso-type machines at the time tended to leave grounds in the drink, and linen bag filters were tiresome to clean.” As such, Bentz went to work looking for an alternative brewing method that was clean, less-bitter, and easy to maintain. Using paper from her son Willy’s notebook, Bentz created the first paper coffee filter. This led to the invention of drip coffee as we know it today. In June of 1908, Bentz was issued at patent from Berlin's Imperial Patent Office and she went into business soon afterward, founding the Melitta company with her sons in Germany.

The next leap in coffee technology came in 1910, when an Anglo-Belgian immigrant named George Washington (not that George Washington) created the first mass-produced soluble coffee concentrate. (There were other instant coffees at the time, but none were mass produced.) That’s right, “Instant Coffee.” The G. Washington Coffee Refining Co’s “Red E Coffee” was fairly popular leading up to America’s entry into World War 1, but demand exploded upon America’s entrance to the war. 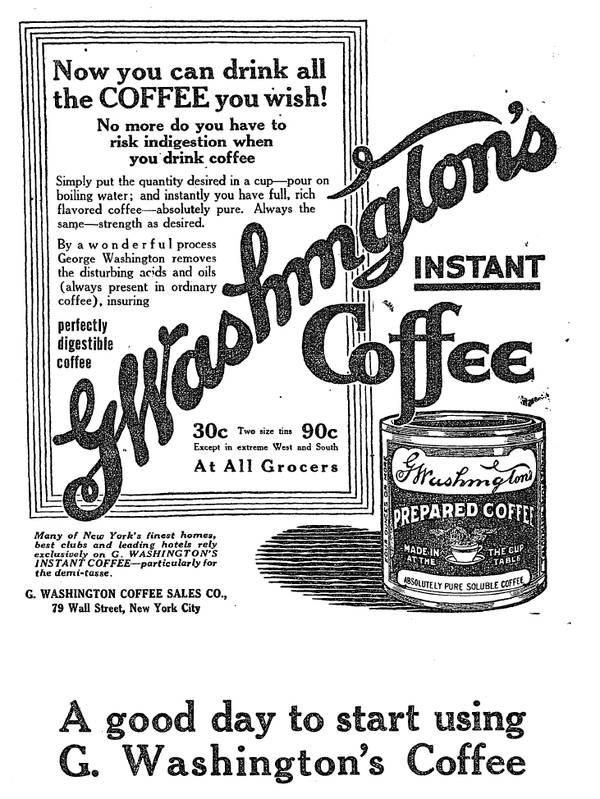 During World War I, international trade was brought to a complete standstill. It became very difficult to ship coffee from the United States into Europe. Typically, by the time coffee reached the troops, it was already completely stale. This difficult journey was also exacerbated by the advent of trench warfare which could completely lock down an entire area as armies sat in stalemate. Moving large amounts of coffee beans to soldiers proved immensely challenging. Even more challenging than transporting coffee across enemy lines, however, is brewing coffee while dug into a trench, fighting for your life. So the American troops began to brew instant coffee behind enemy lines, endearingly calling their drinks cups of...George. At the peak of demand, the US Government was sourcing upwards of 37,000lbs of instant coffee per. day. Following the war, one of Washington’s competitors, Nestle, began producing Nescafe instant coffee and perfected mass production.

In the years between World War I and World War II, coffee’s popularity absolutely exploded in the United States. Advances in industrial technology led to freeze drying beans and vacuum sealing bags for freshness. In 1939, German inventor Peter Schlumbohm sought to create the “perfect brewing method.” Combining his background in chemistry and love for minimalist design, Schlumbohm created the Chemex coffee maker. The Chemex's elegant design would later land it a spot in New York's Museum of Modern Art (MoMA). By the time America entered World War II in 1941, coffee was served just about everywhere, for every reason, and often came with free refills. It’s during this time, the interwar period, that coffee became synonymous with domestic Americana. From 1941 to 1942, First Lady, Eleanor Roosevelt, hosted a weekly radio show entitled “Over Our Coffee Cups.” 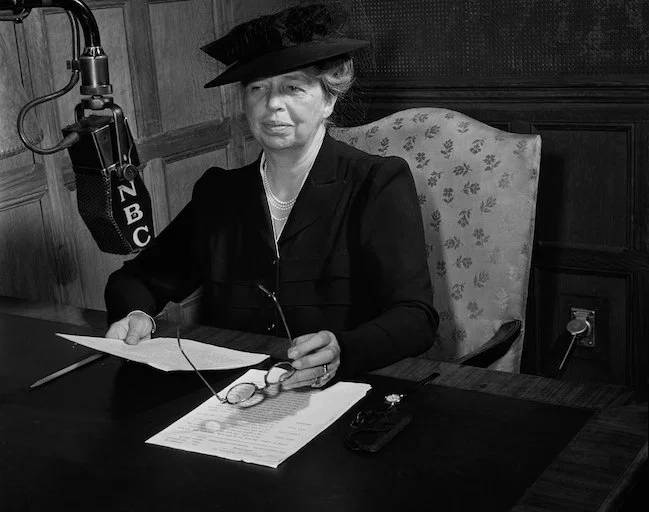 According to some accounts, it’s also during this interwar period that coffee gained its endearing nickname, “cup of Joe”; though, of course, there are conflicting accounts on how this happened. According to Wikipedia, some say “Joe” is a shortened version of “cup of Jamoke,” an abbreviation of Java + Mocha,” which appeared in a military manual in 1931; others say it just reflects an “ordinary Joe,” meaning it’s the drink of an ordinary person; the third likely scenario is that it’s a shortened version of of the WWI name for instant coffee, a cup of George: “a cup of Geo.” As America entered the war, coffee consumption was so high that it became rationed by the government. Looking at an issue of LIFE from November of 1942, there was even guidance on diluting coffee to prolong your stash. Additionally, diners that previously offered a “bottomless cup,” now limited drinkers to a single cup of coffee with their meals; although, some diners would offer a second cup, albeit at an absurdly high price. President Roosevelt famously would reuse his coffee grounds, only adding 1 tsp of fresh coffee to the already brewed grounds. When they couldn’t get fresh coffee, soldiers would often roast acorns with chicory to create a simulated coffee beverage on the front lines. Interestingly enough, in Japan, coffee drinking was associated with western culture and identity so during the war Japan banned the import, sale, and roasting of coffee. It’s also during World War II that American soldiers became more intimate with European brewing methods, such as the espresso machine; however, according to legend, they weren’t very fond of the strong taste of espresso. As a result, Italian baristas would water down shots of espresso so that they would resemble the drinks Americans were used to drinking back home. This, of course, is the birth of the Americano. During the post-War period, GI’s brought what they saw in Europe back to the States. The popularity of espresso and espresso-based drinks increased in America following World War II.

The 1950s brought what might be the most important invention in the coffee industry since roasted beans: the electric drip coffee machine, invented by German inventor, Gotlobb Widmann, and marketed as the Wigomat. Shortly after its creation, the electric drip brewer made its way across seas and became permanently ingrained in American culture—appearing in restaurants and diners across the country. Images of waitresses carrying carafes of coffee saturate popular culture, even today.

By the Vietnam War, coffee began to play a familiar role in American politics. As the Kitchen Sisters note in their Morning Edition segment on NPR, “If War is Hell, Then Coffee Has Offered U.S. Soldiers Salvation,” coffee houses became a place for GI’s to meet and talk about their experiences openly. In a similar method to revolutionary colonists leading up to the American Revolution, returning soldiers would frequent coffee shops in the US and form grassroot resistance groups. The popularity of GI coffeehouses eventually reached the Johnson administration, who ordered surveillance of coffeehouses like the UFO coffee house in Columbia, South Carolina, and Oleo Strut in Killeen, Texas. Even with the anti-war movement building in coffee shops back in the states, coffee was as important as ever on the front lines. As Compass founders, and former Marines, Michael Haft and Harrison Suarez, note in their New York Times blog, “The Marines Secret Weapon: Coffee,” soldiers in Vietnam would burn small amounts of C4 to heat their kettles. 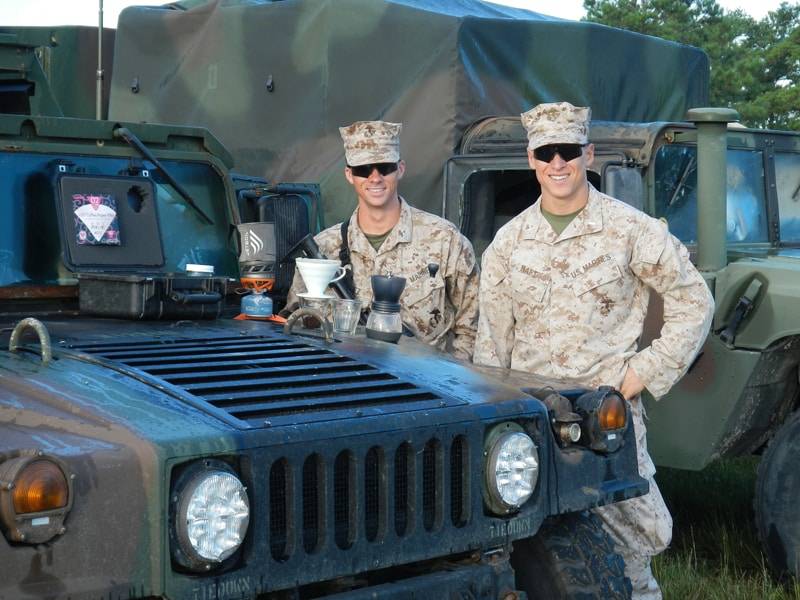 Compass Founders, Michael Haft and Harrison Suarez, brewing a cup of coffee on the hood of a Humvee while serving in the Marine Corps together.

Like many soldiers before them, Harrison and Michael bonded over coffee during their time in Afghanistan. While in training, it was common practice to “make a pot [and] share it with your team.” For American soldiers, coffee is a way to stay up and a way to keep warm, but it’s also a small sense of home—a small piece of American identity to take around the world. In the military, tradition is huge and mugs of coffee are a way to connect with the soldiers that came before. Sharing a cup the morning before a patrol is something the military has done for centuries.

Similarly, as coffee houses were a hotbed for political activity beginning in the years leading up to the American Revolution, they remain that way today. As the former manager of Compass's Roastery location in Shaw, I've seen my share of networking and town hall events in the cafe.There are countless grassroots organizers developing actionable plans in cafes all around the country. The history of America is driven by coffee and innovation.

Have a favorite historical coffee anecdote? We'd love to hear it. Drop it in the comments below!