The Complicated History of the French Press "While it’s uncertain whether the story of the forgetful yet ingeniously adaptable Frenchman is true, the mythical origins of the brewing method point to the complicated relationship between French and Italian inventors in the history of the French Press."

The French Press is one of the most common, albeit underrated, brewing methods in use today. It’s a fairly low-maintenance process that creates exceptionally bold and rich flavors. It’s one of Michael and Harrison’s favorite brewing methods; chances are, if you have spent time in our roastery on 7th Street, you will almost certainly have seen Michael and Harrison headed to a meeting in our lab with their laptops and a French Press of Waypoint in tow.

Whether you call it a French Press, cafetiere, caffettiera a stantuffo, cafetière à piston, Stempelkanne, or coffee plunger, the coffee press method is an exquisite example of immersion brewing: grounds are immersed in water and left to brew. As the grounds are left in the water, flavor is extracted in a similar style to the ways in which flavor comes together in a slow cooker. Extraction can happen at varying temperatures, though time should be adjusted based on the brewing temperature. Before serving, the extracted grounds are separated from the brewed coffee through a metal mesh filter. Since the coffee isn’t filtered through paper or cloth, those amazing oils are left in the resulting drink making a super bold, full-bodied coffee. 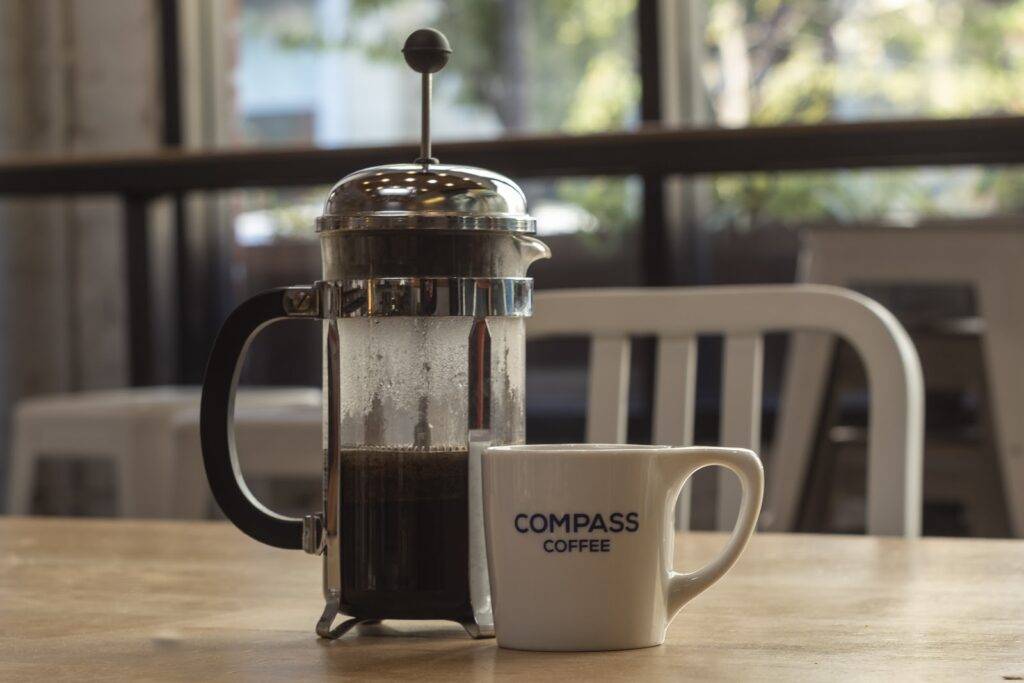 The French Press isn’t limited to a vessel to brew perfectly bold and full-bodied coffee. It’s great for frothing milk in lieu of a steam wand. If you have a knackering to live your best prairie life, a French Press will definitely churn your heavy cream into butter. And, believe it or not, Bon Appetit writer, Rochelle Bilow, also suggests using it to make broths.

Since the French Press process is fairly uninvolved, it’s a brewing method that’s great for travel, especially while camping or when you’re in an environment where you’re not able to bring a ton of specialty equipment like an electric gooseneck kettle, your chemex, and packs of filters.

Like many of the best things in life, the French Press was allegedly discovered by accident. According to legend, in the 1850s, a Frenchman was brewing coffee on his usual morning walk. Midway through brewing, he realized he forgot to put grinds in the water. (I mean, who could blame him. We’ve all done weird things pre-coffee.) In a panic, he added coffee to the already boiling water. When the grounds rose to the top, he placed a metal screen he had purchased from an Italian merchant atop the boiling water and pushed it down with a stick. 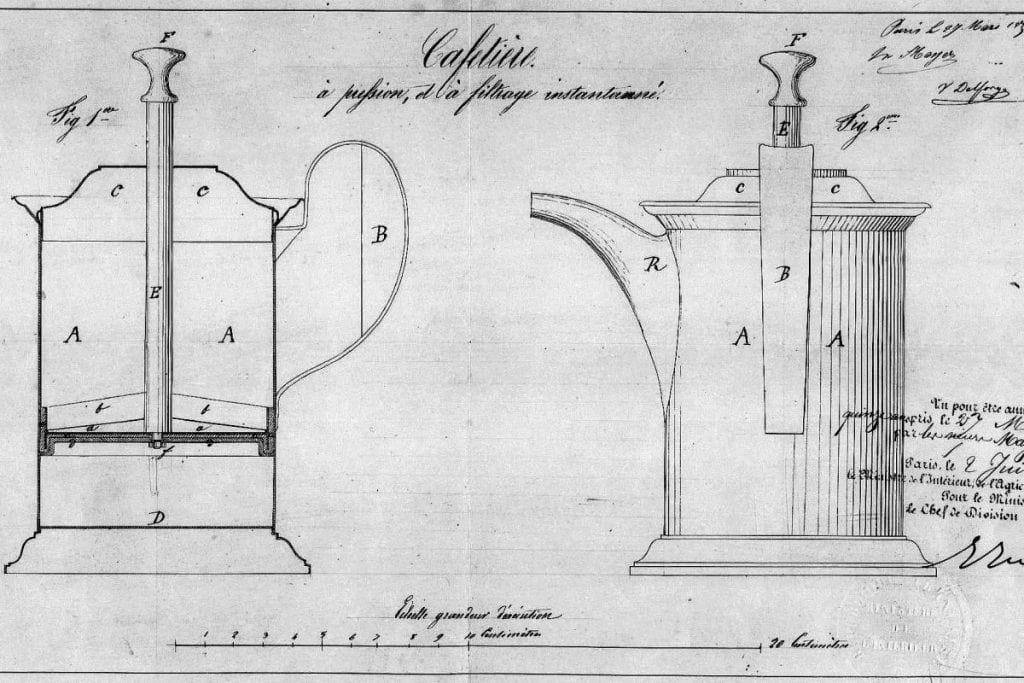 A photocopy of the original coffee press patent.

The first coffee press was patented in 1852 by two French inventors, Mayer and Delforge. While their design looked fairly similar to the French Presses we use today, the key difference was the use of cheesecloth rather than a metal mesh filter to separate the extracted coffee from the brewed beverage. The first iteration of the modern French Press came about much later, in 1928. This version of the press, patented by Italian inventors, Atillio Calimani and Guilio Moneta was, for a “vessel adapted to contain a liquid, as f.i. water whereinto substance to be infused, as for instance coffee in powdered form is poured with a slidable filtering member having a fit sufficiently tight within said vessel in such a manner that, causing by suitable means the said member to slide towards the bottom of the vessel the infusion will be rapidly filtered to get it ready for use.” Though it’s commonly referred to as a French Press, the design we use today is largely based on the design set forth by Calimani and Monta, which (as I’m sure you can imagine) has led to quite the amount of drama in the Italian and French coffee world. 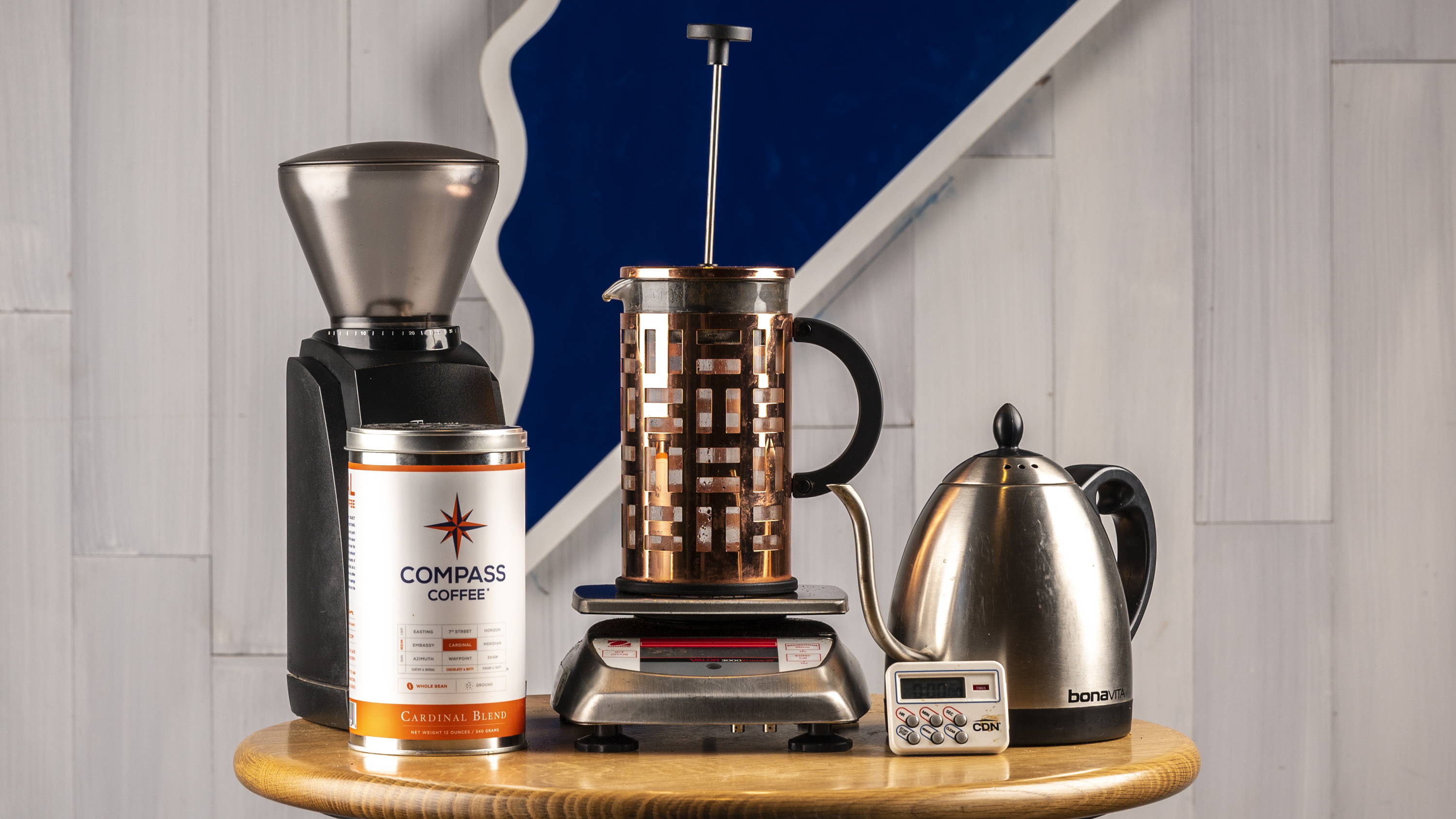 The French Press is a favorite method of brewing here at Compass Coffee. It produces a wonderfully intense cup that's packed with flavor and perfect for sharing with friends and family. What could be better?!